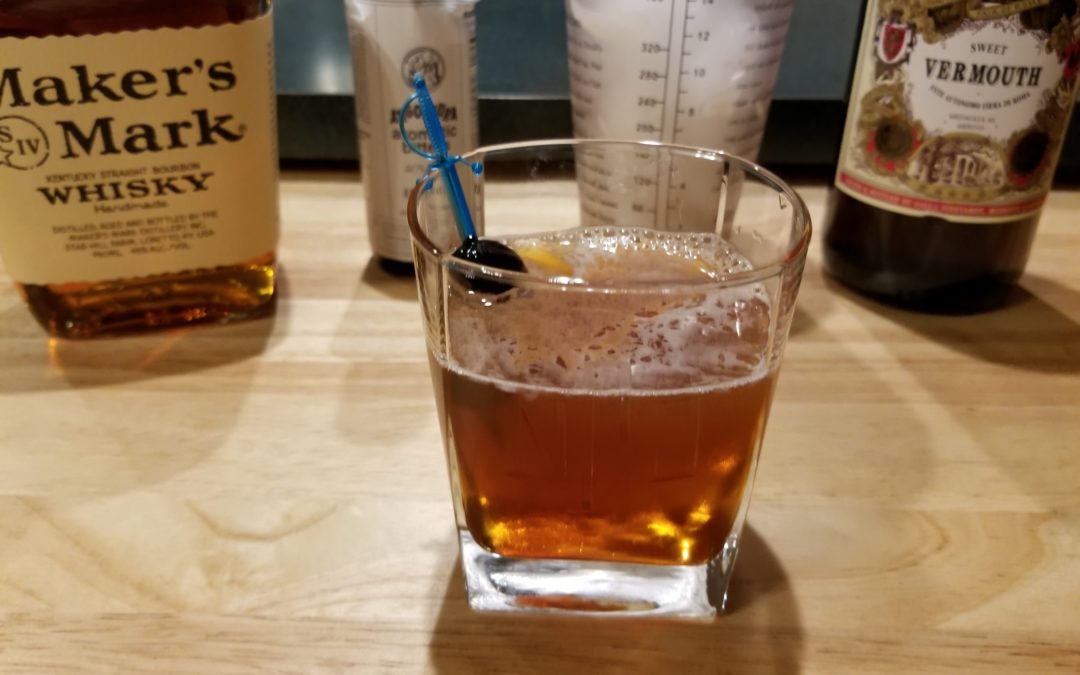 The goal here at DIYExploits.com is to make projects approachable and fun. With an emphasis on the latter, let’s talk about a simple build, how to make a Manhattan cocktail. Yes, we are talking whiskey today! Specifically, bourbon is my choice, but more on that in a bit. First, let’s get to the recipe. (Yes, unlike typical food bloggers that make you scroll past 3000 words, we start with the recipe.) 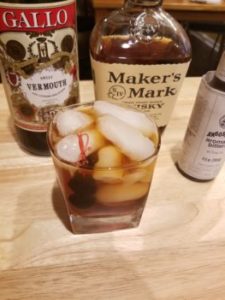 Building a Manhattan is as easy as adding some whiskey and vermouth to a short glass with ice. Give it a quick stir. Drop in a few dashes of bitters. Add a couple of cherries. Bob’s your uncle. (Keep reading for the variation alluded to in the title!)

Despite it really being that simple, people are sometimes intimidated by making a Manhattan. Part of the problem is some confusion about picking the “right” whiskey. I have Jim Beam listed in the recipe because it is relatively inexpensive and works well. If the mood strikes me, I’ll use Maker’s Mark Bourbon or Bulleit Bourbon. You might also try rye, which is more traditional. The key point to takeaway from this is that you don’t need to get hung up on the type of whiskey. Use what you have or pick up and mid-priced brand if you are looking to impress.

However, there’s a dark side to the Manhattan. It’s when people get too wrapped up in (made up) rules they see. Rules that often have nothing more backing them up than an implied “because I or a nebulous they said so.” For example, check out this article – The Do’s and Don’ts of Making a Manhattan – that dutifully tells you what you are allowed and not allowed to do.

Apparently, the “best results” require items such as “a proper bar spoon” and a “coupe.” No not a coupe, but a coupe because that’s not confusing (or pretentious), AT ALL.

Now, I get that some people may (or at least think they do) pick up on the subtle nuances that come from the way a particular glass traps aroma. So, let’s just leave that one at pretentious. But do you “need” a bar spoon? Seriously? A regular spoon won’t stir? Or a butter knife for that matter? I’m willing to bet that you could pull any clean, non-porous utensil out of your kitchen drawer and stir the damn drink and no one could tell a damn difference. And if I was mid-cycle with the dishwasher and had no utensils, I might try a Slim Jim or a strip of bacon to stir it! (Just kidding. Maybe?)

Of course, nothing creates more controversy or condescending headshaking than the idea of…wait for it…shaking a Manhattan. In fact, the article is very clear with the firm rule “DON’T: Shake the cocktail” where it is noted:

Repeat after me: A Manhattan must be stirred, not shaken. While shaking gets the drink cold like stirring, it leaves the concoction a cloudy mess. It’s the worst mistake you can make with this drink. The best method is to stir the drink with a bar spoon, leisurely, for at least 20 to 25 rotations.

In no uncertain terms, the article sounds the trumpets that this is THE WORST MISTAKE you can make. We are talking about cataclysmic devastation. You know, the sort of catastrophic results the GhostBusters warned of for crossing the streams. (It’s even rumored that the Dark Ages where the result of the first time someone shook a Manhattan.)

Okay, maybe some of this is exaggerated, so let’s talk about the “proof” presented as to why this is bad – the drink will get cloudy. While the article doesn’t feel the need to really explain it, there is something going on here. The cloudiness is the result of aeration, and it does change the taste. It can also dilute the drink a bit.

And, to be fair, there are numerous “experts” that agree with this article’s take. In fact, I would say it is generally accepted as a drinking “truth” that it is wrong to shake a Manhattan. And, if everyone says one way is right, then it must be right. After all, it’s not like groupthink can ever be wrong. (You know things like the earth is flat or the sun revolves around the earth or that radon water is good for you, uh…)

Should I shake a Manhattan cocktail?

So yes, shaking a Manhattan does change it. But is different bad? Doesn’t that really depend on the taste of the person consuming the drink? After all, true traditionalists will argue that a Manhattan should actually be make with rye whiskey. However, over time many found that they preferred bourbon and that variation is now accepted. And, couldn’t someone just as easily argue that putting vermouth in a good bourbon detracts from the taste of a quality bourbon? At what point did having a cocktail go from a relaxed good time to a pompous display of right vs. wrong? Go ahead, ask it – Should I shake a Manhattan cocktail?

How to Shake a Manhattan – Just Try It 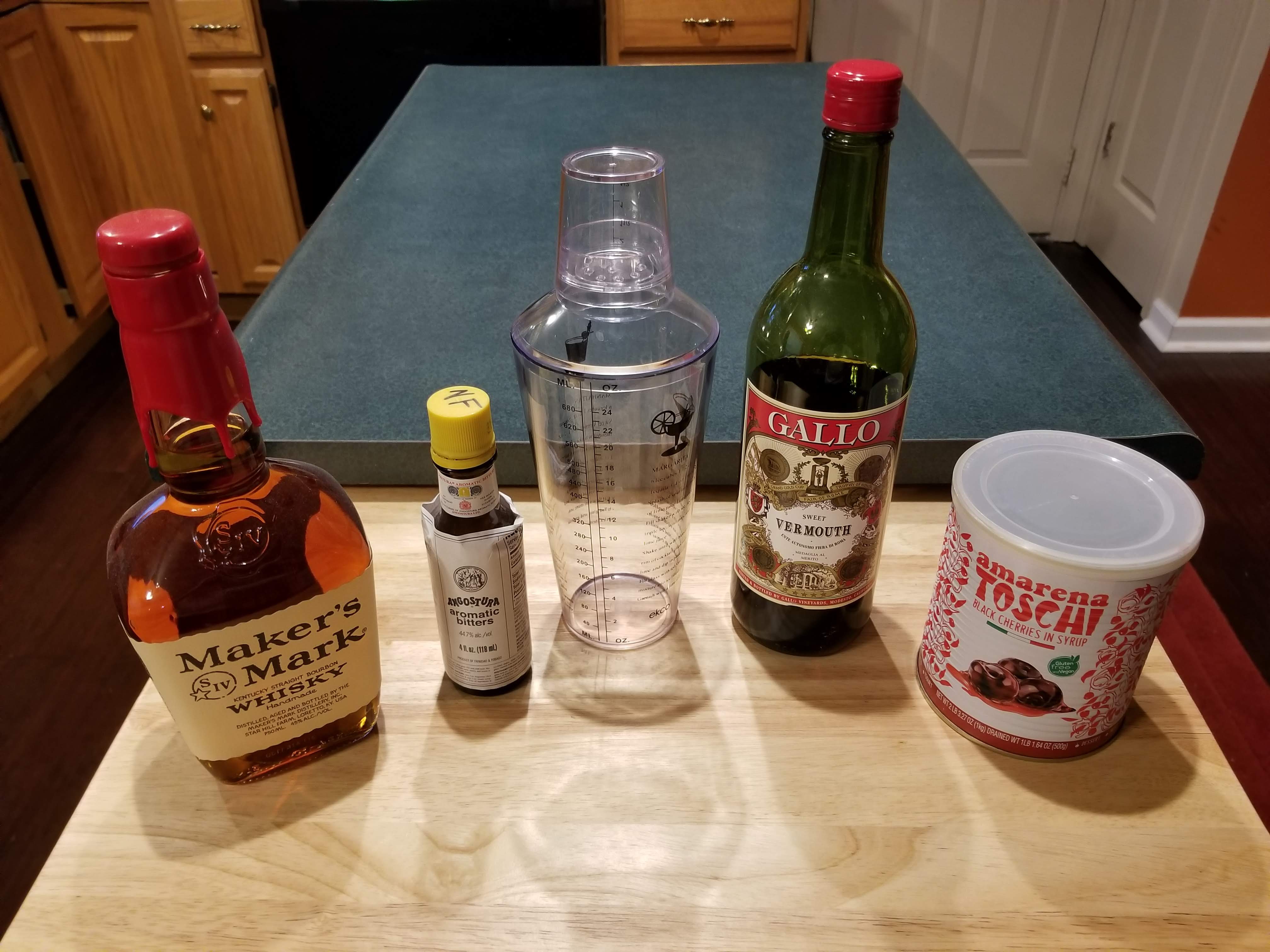 After unquestioningly following the proper rules for stirring a Manhattan for years, I was lured by the dark side to try a shaken a Manhattan. Of course, I protested. Of course, I pointed out everyone says that’s wrong. But the pusher was insistent, as fathers can be, and he had a story…

It turns out he was on a trip and had a drink at the fancy hotel bar. When he ordered a Manhattan, the bartender pulled out the shaker. My father had a look of concern on his face, so the bartender made him a deal – “try it, and if it isn’t the best Manhattan you’ve ever had, I’ll make one your way on the house.” With nothing to lose, so it began. 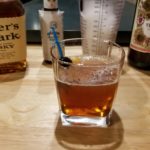 He poured the cool liquid from the shaken and pushed the glass toward me. I stared at the drink and gave it a sniff. It didn’t look like my usual drink of choice, but it smelled like it. With trepidation, I gave it a taste and waited for a sign from above that I had violated the natural order of the world. With no cracks of thunder or shaking of the ground, I enjoyed another sip and decided that some rules are meant to be broken.