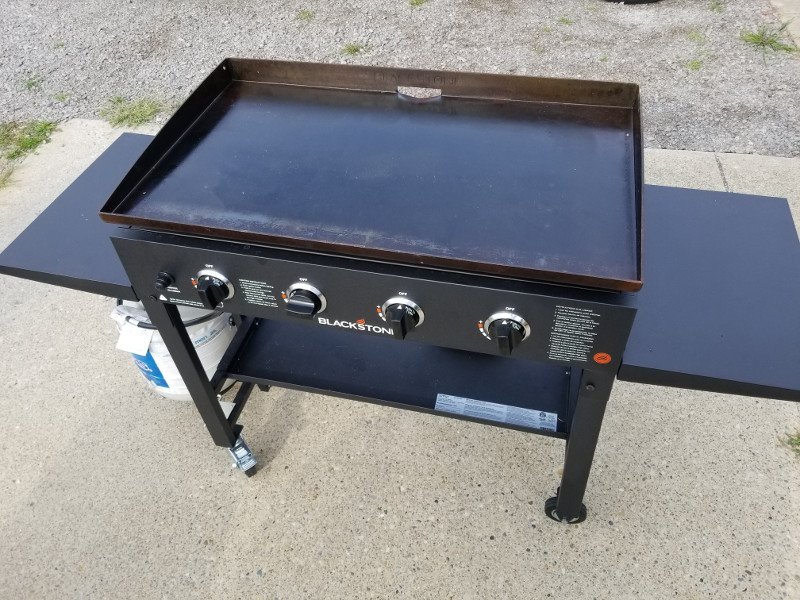 I have now been putting the Blackstone 36-inch outdoor flat top griddle through its paces for over a year and think it’s time to offer a detailed review.

Before we talk about the griddle itself, I think it’s important to talk about the [lack of] customer service. No matter how well a company is run, it is inevitable that an occasional sub-par product will make it off the production line. The question is how the company deals with it.

In my case, I actually ordered two Blackstone 36-inch outdoor flat top griddles. One was for me and one was a gift for my dad. If there is a silver lining, the defective unit was the one I set up for me and not the one I gave to my dad.

The issue with my griddle was that the first 3 inches, all the way across, had some sort of defect in the steel. I am experienced with reconditioning cast iron skillets and working with grills so I initially thought I could salvage it. Plus, I wasn’t looking forward to the prospect of having to ship this 134-pound behemoth back to Amazon! As the directions say, I scrubbed griddle top repeatedly. Once it was thoroughly rinsed and dried, I coated it with oil and got it up to temp to start the seasoning process. I repeated the seasoning process multiple times (as directed) until the top was as black as midnight. Well, at least most of it was. The front 3 inches were clearly not seasoning like the rest of the flat top. At that point, I reached out to Blackstone customer service to see if they could offer any advice. And I waited, and I waited. More than two months later (yes, months!) I received a generic response that touted “We want to assure you that we are a company that stands behind our products and takes pride in our customer service…” and went on to say that it will eventually season. (I will circle back to this point later.)

Needless to say, actions speak louder than words when a company that says they take pride in their customer service takes more than two months to respond!

If you are considering ordering a Blackstone 36-inch outdoor flat top griddle online, keep in mind that you might not get much in the way of customer service if you have a problem.

As noted above, I ordered two griddles and the other top was fine so let’s assume the issue above was an isolated production flaw and talk about the product.

The description on Amazon noted the following when I bought the griddle:

Let’s address these points in detail…

Putting aside issues of atrocious customer service and seemingly spotty product quality control, the concept of the Blackstone 36-inch griddle is great. While I would not buy it as a replacement for a standard gas grill, it has definitely earned a place alongside it. It’s perfect for cooking for large groups and gives you the flexibility to cook food you normally wouldn’t, or couldn’t, cook on a grill. And, while clean-up is a somewhat tedious process, it can still be a time saver compared to cleaning multiple cooking vessels. For example, we recently hosted a party where we cooked up 9 pounds of pork chops with a stir-fry type of side using riced cauliflower. All of this was done on the Blackstone, which saved having to wash crock pots and pans.