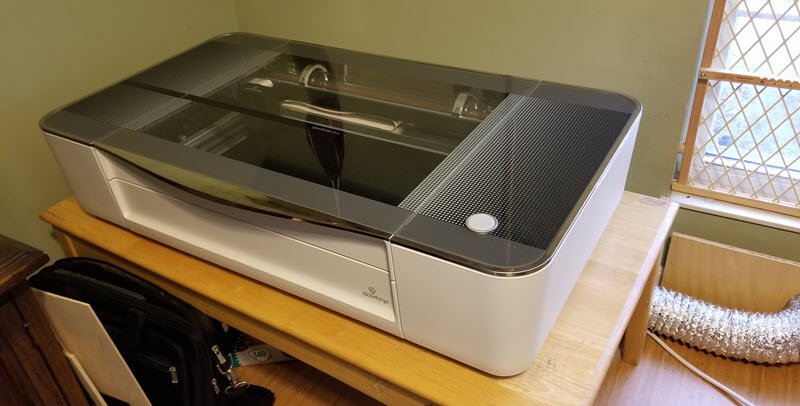 My Glowforge Plus was delivered 5 weeks ago. I would love to say I have been using it for the full 5 weeks, and everything has been great but, alas, that isn’t the case. I am sharing some initial experiences to help others hit the ground running.

I knew I needed to have a space for the Glowforge, and this needed to be near a window for venting. I had a rough idea of where it could sit in my office near a window. However, it wasn’t until I had the Glowforge in my office that I realized just how much space it would take up. Also, it’s heavy. I’m not talking 1960 Lincoln Continental convertible heavy, but the Glowforge does weigh more than a few pounds, so you need something sturdy. Before the unit showed up, I had initially thought I would just quickly build a rolling cart. However, given the heft (both in terms of weight and the cost), that idea was put on the back burner until I have time to build a mobile cart that that is robust enough to make me feel comfortable. Luckily, I had a sturdy, unused coffee table that was available. Unluckily, it meant I had to relocate a small cabinet and shelving unit I hadn’t planned on moving. 2: Plan for the Venting

As alluded to above, I knew the Glowforge needed to be close to a window to vent exhaust fumes and smoke. I had a room with a window, so I just thought I would figure the details out when it got here. This needlessly ended up being one of the factors that delayed me the most. I say needlessly because the solution ended up being simple, but I got hung up on some meaningless “advice.” Specifically, I read reviews that talked about how the exhaust hose and clamps that come with the Glowforge are a problem, and you need to either buy some sort of exhaust port extension or figure something out. I ended up losing more than a week ordering parts and trying to fix a problem that ended up NOT being a problem. In the end, I used the supplied exhaust kit and parts and haven’t had a problem. To attach it to the window, I cut a piece of scrap plywood and attached a cheap exhaust hood vent cover like you use for a dryer. And for those wondering, the blue part in the picture is painters tape covering a notch that was already in my scrap lumber. The idea was that this was a proof of concept set up so I could see what I needed to actually build/buy. However, it works totally fine. I just open the window a bit, place this in, and slide the window down to hold it place. All told, it probably took me 15 minutes to assemble this and it takes less than 60 seconds to put up and take down. Down the road, I might make something more visually appealing but for now it works, and I wish I would have just tried this when I first got the Glowforge. I was surprised how much of my time I have spent getting up to speed on graphics and software. I have basic graphic skills and dabble with the Adobe Creative Suite and GNU Image Manipulation Program (GIMP). However, I was totally unprepared to be thrown into the world of turning an idea into an SVG file. I knew I would have to create plans on my computer, but my first few attempts were frustrating failures. There are tons of online tutorials, and I eventually muddled my way through a number and started to at least get a handle on what I don’t know. As soon as I purchased my Glowforge, I wish I would have started learning more about creating SVGs so I could hit the ground running. It was a bit disheartening to spend several hours trying to create a simple engraved cut out that took 3 minutes to cut.

4: Get Very Familiar with Photoshop

I knew from my early research on the Glowforge that I wanted to engrave photos onto wood. I have seen these online and had bunches of ideas. I had visions that everything holiday and birthday for the next 5 years were covered. Just grab a picture and a piece of wood! And then I went to try it. It became clear that dabbling in the Adobe Creative Suite wasn’t going to cut it. I have managed to stumble my way through a few engravings, but they are nowhere near where I want them to be. I would offer more advice on this topic, but I don’t yet know enough to offer any other than this – search for something like “prepare picture for laser engraving” and check out a few of the articles and videos. If those make immediate sense to you, you’re probably fine. If, like me, you had to stop and look up “dodge tool” and “burn tool,” then start getting familiar with Photoshop.

5: Be Prepared for Noise and Odors

This one is on me. There are plenty of reviews out there that talk about how loud the exhaust fans are and how you still get some odors. I just didn’t pick up on it. I actually don’t think either is as bad as some make them out to be, but it is definitely a thing since you are supposed to watch the Glowforge the entire time. I just completed a project today that took 58 minutes and admit it was mildly annoying. I didn’t feel like I needed ear protection or a mask.

6: Plan to Get the Correct Materials (This is a Big One)

I admit that I didn’t do enough research on this one. I planned to initially work mostly with wood, and since I have a decent workshop, I assumed finding materials would be a simple as walking out the garage and grabbing something. However, it’s not quite that simple. In reality, Glowforge is really focused on using what they call their Proofgrade materials. When using their materials, set up is supposed to be super easy. Think like the Ron Popeil “set it and forget it” easy. The material is covered with a masking tape like covering that protects the wood from soot and has a QR code that Glowforge is supposed to read. In theory, you simply put the Proofgrade material in, shut the lid, and the Glowforge reads the code to automatically dial in all your settings. My Glowforge purchase came with a started set of Proofgrade sheet goods. However, I haven’t been able to get the Glowforge to actually read the QR code. The sticker is down on the corner, and the Glowforge uses a fisheye lens, so the edges are always distorted. There might be a fix for this, but there is an option in the interface to manually select the Proofgrade material, so I have just been doing that. This system seems to work well when using Proofgrade materials.

As the image above shows, you don’t have to use Proofgrade materials. But I have to admit, it’s a bit unnerving to click on the “use uncertified materials” button. It feels like walking into a cave that says enter at your own risk and shows someone crushed by a rockslide.

Entering the “uncertified materials” realm means you must manually enter all the settings for the laser.

Glowforge does provide some explanation but, I don’t inherently know what I should enter on power speed, lines per inch, or the number of passes. Luckily, there is a helpful community built around Glowforge, so people have published some guides to give you a jumping-off point.

One of the major issues I wish I knew beforehand is the focus on using Proofgrade and the fact that Glowforge has been sold out of many/most of the materials since I started using it. I captured the screenshot of their store page today. It lists 33 items, with all but 4 being out of stock. In other words, you are buying a machine designed to use materials where 88% are out of stock. I understand that 2020 is a unique year, but I might have considered waiting on my purchase if I understood the focus on Proofgrade and the fact that it doesn’t seem to be available.

7: Watch What is Happening with Glowforge’s Premium Subscription

When I started using my Glowforge, there was a cool beta program that offered an easy way to add images and text. It was really great, especially for a beginner like me. However, I now see a message that this has moved from its free beta to a premium subscription with a list price of $50 per month. Yes, that’s correct, it’s listing for $600 per year! It would be easy enough to say that I simply don’t need those images and text, but there is something more going on here.

The image to the right is a partial screenshot of what you see when you send your design to your actual Glowforge. Notice the language at the bottom. This implies that those that don’t spend money for the Glowforge premium subscription are going to end up in the “slow lane.”

Big picture, this represents a huge concern for me as it illustrates the power that the company has over how you might be able to use a tool I fully paid for in the future.

In most situations, you buy a tool, and it’s yours to use as you see fit. In this case, you need their software (which is cloud-based, you don’t directly have it) to interface with the tool you “own.” However, without their software, my Glowforge is just a $4000 paperweight. In theory, they could make not upgrading to premium (or whatever other future programs they decide to offer) so slow and painful that paying for premium essentially becomes needed. Hopefully, that doesn’t happen, but it is definitely something I wish I would have known about before buying.

Overall, I am currently happy with my Glowforge. Points 1 through 5 are simple planning and learning items. Points 6 & 7 are a little more concerning. If Proofgrade materials are in such short supply, my hope is that the company makes using “uncertified materials” a little less daunting. Finally, I am not sure how to quantify the concerns about their intentions with premium subscriptions. It would be great not to have to worry about it, but with a list price of $600 per year, the company clearly views this as a revenue center.

If, after my concerns, you are still even considering purchasing a Glowforge, you can click this referral link to get up to $500 off. (And just to be clear, I’ll also get a referral for your purchase.)