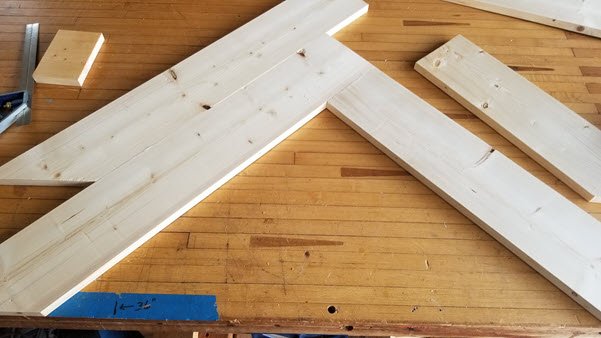 For Christmas this year, we finally decided to retire our old artificial tree. After nursing it along a number of years ago by fixing the lights, and then restringing it a couple of years ago, we decided it was time. The final straw was it started dropping plastic needles everywhere. And I mean everywhere. It was if the needles had evolved into their own evil life form that sent out airborne spores that floated all around the house and only grew into their full sized only after the sound a vacuum triggered them.

On a personal note, I also dreaded the laborious task of lugging around the tree heavy sections. There was just no easy to way to carry them and part of me wondered if they were intentionally designed that way. Perhaps the manufacturers intended to sell a follow up product that was actually some sort of carrier and they just never got around to it?

Given the concerns above, we decided that building a DIY wooden might suite our needs. My daughter was tasked with coming up with designs and running those the rest of the family for input. I reserved the right of final say as I was the one who had to build it, to move it, and figure out storage.

We decided on what I ended up calling a ‘two-dimensional’ design, meaning that it would sit flat against the wall. This was not only easier to build and lighter than a ’round’ tree, but it also meant we could put it in our family room where a traditional tree wouldn’t fit.

For those already proficient in DIY projects, this is a quick overview of the project as the clock is already ticking. I’ll follow up after the holidays with more a detailed project plan. You can sign up for updates here.)

To keep things relatively light weight, I used 1×6 pine and put the tree on a short stand. The stand gives the tree height without requiring the need to keep adding boards to fill it in.

I opted to join the boards using biscuits and standard wood glue. The stand is a planed down 2×4 that runs all the way to the top to help reinforce the structure. I followed that by a adding a couple of runners along the back to add additional reinforcement.

To give the tree some interesting character, we opted for a herringbone pattern for the boards and finished the wood with a light char using a blow torch. I did add few light coats of spray poly to keep the char from smearing.